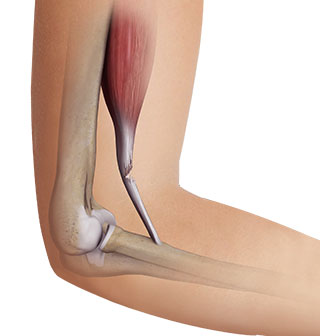 What is a distal biceps tendon rupture?

What parts of the elbow are affected?

The biceps muscle goes from the shoulder to the elbow on the front of the upper arm. Tendons attach muscles to bone. Two separate tendons connect the upper part of the biceps muscle to the shoulder. One tendon connects the lower end of the biceps to the elbow. The lower biceps tendon is called the distal biceps tendon. The word distal means that the tendon is further down the arm. The upper two tendons of the biceps are called the proximal biceps tendons, because they are closer to the top of the arm. The distal biceps tendon attaches to a small bump on the radius bone of the forearm. This small bony bump is called the radial tuberosity. The radius is the smaller of the two bones between the elbow and the wrist that make up the forearm. The radius goes from the outside edge of the elbow to the thumb side of the wrist. It parallels the larger bone of the forearm, the ulna. The ulna goes from the inside edge of the elbow to the wrist.

Contracting the biceps muscle can bend the elbow upward. The biceps can also help flex the shoulder, raising the arm up. And the biceps can rotate, or twist, the forearm in a way that points the palm of the hand up. This movement is called supination. Supination positions the hand as if you were carrying a tray.

What causes a rupture of the distal biceps?

The most common cause of a distal biceps rupture happens when a middle-aged man lifts a box or other heavy item with his elbows bent. Often the load is heavier than expected, or the load may shift unexpectedly during the lift. This forces the elbow to straighten, even though the biceps muscle is working hard to keep the elbow bent. The biceps muscle contracts extra hard to help handle the load. As tension on the muscle and tendon increases, the distal biceps tendon snaps or tears where it connects to the radius.

What are the symptoms?

When the distal biceps tendon ruptures, it usually sounds and feels like a pop directly in front of the elbow. At first the pain is intense. The pain often subsides quickly after a complete rupture because tension is immediately taken off the pain sensors in the tendon. Swelling and bruising in front of the elbow usually develop shortly after the pop. The biceps may appear to have balled up near the elbow. The arm often feels weak with attempts to bend the elbow, lift the shoulder, or twist the forearm into supination (palm up). The distal biceps tendon sometimes tears only part of the way. When this happens, a pop may not be felt or heard. Instead, the area in front of the elbow may simply be painful, and the arm may feel weak with the same arm movements that are affected in a complete rupture.

How is it diagnosed?

An early diagnosis is best. If surgery is needed, people who've ruptured their distal biceps tendon usually have better results when surgery is done soon after the injury. Your doctor will first take a detailed medical history. You will need to answer questions about your pain, how your pain affects you, your regular activities, and past injuries to your elbow. The physical exam is often most helpful in diagnosing a rupture of the distal biceps tendon. Your doctor may position your elbow and forearm to see which movements are painful and weak. By feeling the muscle and tendon, your doctor can often tell if the tendon has ruptured off the bone.

X-rays may be ordered. X-rays are mainly used to find out if there are other injuries in the elbow. Plain X-rays do not show soft tissues like tendons. They will not show a distal biceps rupture unless a small piece of bone got pulled off the radius as the tendon ruptured. This type of injury is called an avulsion fracture. Your doctor may also order a magnetic resonance imaging (MRI) scan or an ultrasound scan to see if the biceps tendon is only partially torn or if the tendon fully ruptured.

What is the treatment?

Nonsurgical treatment:
Many doctors prefer to treat distal biceps tendon ruptures with surgery. Nonsurgical treatments are usually only used for people who do minimal activities and require minimal arm strength. Nonsurgical treatments are only used if arm weakness, fatigue, and mild deformity aren't an issue. If you are an older individual who can tolerate loss of strength, if the injury occurs in your non-dominant arm, or there has been a long delay between the injury and diagnosis, you and your doctor may decide that surgery is not necessary. Not having surgery often results in significant loss of strength. Flexion of the elbow is somewhat affected, but supination (which is the motion of twisting the forearm, such as when you use a screwdriver) can be very affected. A distal biceps rupture that is not repaired reduces supination strength by about 50 percent.

Nonsurgical measures may include a sling to rest the elbow. Anti-inflammatory medicines help ease pain and swelling and you may be referred to a physiotherapist.

Surgical treatment:
People who need normal arm strength get best results with surgery to reconnect the tendon right away. Surgery is needed to avoid tendon retraction. When the tendon has been completely ruptured, contraction of the biceps muscle pulls the tendon further up the arm. When the tendon recoils from its original attachment and remains there for a very long time, the surgery becomes harder, and the results of surgery are not as good.

In a direct repair, the surgeon begins by making a small incision across the arm, just above the elbow. Forceps are inserted up into this incision to grasp the free end of the ruptured biceps tendon. The surgeon pulls on the forceps to slide the tendon through the incision. Attention is given to the free end of the tendon. A scalpel is used to slice off the damaged and degenerated end. Sutures are then crisscrossed through the bottom inch of the distal biceps tendon. The original attachment on the radius, the radial tuberosity, is prepared and the tendon is fixed back to the bone.

If more than three or four weeks have passed since the rupture, the surgeon will usually need to make a larger incision in the front of the elbow. Also, because the tendon will have retracted further up the arm, graft tissue may be needed in order to reconnect the biceps to its original point of attachment on the radial tuberosity.

It usually takes up to a year to recover after the surgery and even with a successful repair there may still be some residual weakness and stiffness.