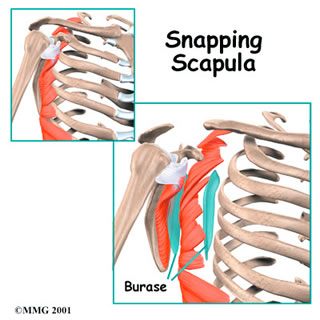 What is a snapping scapula?

What parts of the body are involved in this condition? 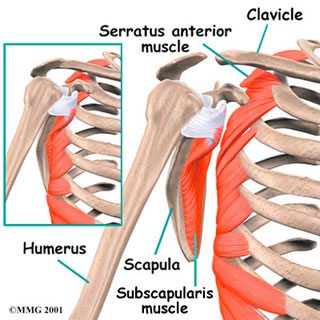 A bursa is a fluid-filled sac that cushions body tissues from friction. A bursa sits between the two muscles of the scapula. There is also a bursa in the space between the serratus anterior muscle and the chest wall. When bursa sacs become inflamed, the condition is called bursitis. Scapulothoracic bursitis refers to inflammation in the bursa under the shoulder blade. This type of bursitis is most common in the upper corner of the scapula nearest the spine. It also occurs under the lower tip of the scapula. In either case, it can cause the sounds and sensations of snapping scapula syndrome. A person can have bursitis in the joint without any grinding or popping.

What causes a snapping scapula?

Snapping scapula is caused by problems in the soft tissues or bones of the scapula and chest wall. It can start when the tissues between the scapula and shoulder blade thicken from inflammation. The inflammation is usually caused by repetitive movements. Certain motions of the shoulder done over and over again, such as the movements of pitching baseballs or hanging wallpaper, can cause the tissues of the joint to become inflamed. In other cases, the muscles under the scapula have shrunk (atrophied) from weakness or inactivity. The scapula bone then rides more closely to the rib cage. This means the scapula bumps or rubs on the rib bones during movement. 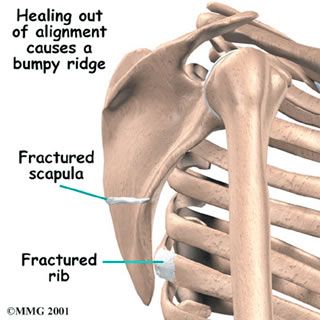 Changes in the alignment or contour of the bones of the scapulothoracic joint can also cause snapping scapula. When a fractured rib or scapula isn't lined up just right, it can cause a bumpy ridge that produces the characteristic grind or snap as the scapula moves over the chest wall. Grinding and snapping can also happen if there are any abnormal curves, bumps, or ledges on the upper edge of the scapula closer to the center of the back. (These abnormalities are called Luschka's tubercles.) Any time there is an abnormality in the bone, one of the body's possible responses is to form a bursa. The new bursa may then become inflamed, causing the symptoms of bursitis.

What are the symptoms?

Grating, grinding, or snapping may be heard or felt along the edge or undersurface of the scapula as it moves along the chest wall. These grinding sensations are also called crepitus. Sometimes the joint pops or thumps during movement. Often, these sensations cause no pain. Scapulothoracic bursitis, on the other hand, is painful whether or not there is any crepitus in the joint. The sore bursa is usually tender to the touch, and the tissue in the sore area often feels thick.

How is it diagnosed?

Your doctor will ask many questions about your medical history. The goal is to find out if you've had similar problems in the past, if you've injured your scapula, and if any of your activities require repetitive shoulder movements. Your doctor will also do a physical exam. He or she will check the alignment of the scapula. Your doctor may listen with a stethoscope while you move your shoulder and scapula. You may feel pain as you move, but it is important that your doctor knows exactly where your problem is coming from. By feeling the tissues around the scapula, your doctor can find out if the bursa is tender or thickened from inflammation. Your doctor may order an X-ray to see between the scapula and rib cage. An X-ray image can show abnormalities in the bone, such as a rib or scapular fracture. In cases where there may be a problem with the bones, your doctor may order a computed tomography (CT) scan to get a more detailed look. If bursitis is suspected, a magnetic resonance imaging (MRI) may be used to locate the bursa and see how big it is.

What is the treatment?

Nonsurgical treatment:
Most doctors prescribe nonsurgical treatments for patients with snapping scapula. These types of treatments are generally successful, especially when the problem is coming from soft tissues. Doctors may start by prescribing nonsteroidal anti-inflammatory drugs (NSAIDs), such as aspirin and ibuprofen. Rest and ice also help reduce inflammation and ease pain. Some patients benefit by working with a physiotherapist. If pain and inflammation don't go away with these treatments, your doctor may recommend one or two injections of cortisone into the bursa. Cortisone is a steroid that effectively reduces inflammation.

Surgical treatment:
Doctors usually recommend surgery only if nonsurgical treatments have failed. Surgery may be needed if the problem is caused by a bone abnormality. In the most common surgery for snapping scapula, the surgeon takes out a small piece of the upper corner of the scapula nearest to the spine. Some surgeons are able to do this through keyhole (arthroscopic) surgery, which may be less painful and allow a quicker recovery. Small incisions allow the surgeon to insert a small TV camera, called an arthroscope, into the joint. Through another small incision, the surgeon uses special instruments to remove the inflamed bursa and bone while the arthroscope shows what is happening.